March 02, 2010
To read the curtain raiser click here
“You are pregnant” said Marsha

“I said you are pregnant” She felt the energy of the new life emanating from Malini.

Malini suddenly felt dizzy, she looked around for a chair to sit, but started falling before she could take the next step. Marsha caught her just in time. Malini opened her eyes when she felt the moist hands of Marsha on her face. Marsha spoke in whisper.

“Are you feeling ok?”

“Yes I guess. How do you know I am pregnant? I am not even sure yet”

“I just know” she replied, and that’s how their friendship began. From then on they met frequently. Sometimes Malini would go to Marsha’s house for a chat over coffee, a healing session or even for a witch ritual. In the days that passed Ranbir saw a total shift in Malini’s behaviour, she was happier than ever and was very comfortable with pregnancy. Now and then Malini would talk about rituals, and meditations she does with Marsha, over breakfast or dinner to Ranbir. Although Ranbir was uncomfortable talking about them, he didn’t mind it. For it kept Malini occupied and happy.

On their 3rd Anniversary Malini was 5 months pregnant and insisted visiting the zoo. Ranbir have learnt about pregnancy and strange cravings, so he pulled few strings and arranged a private VIP tour to the London zoo. Although there was a battery operated car to take them around, Malini walked the entire park. She took enough time in each enclosure, observing the animals. She asked several questions to Greg, the guide. When they reached the Tiger’s cage, she took a long look at the white tiger lying next to the bars. It kept growling at Malini for several minutes. 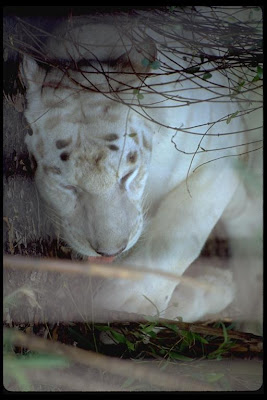 Thanks to philip.greenspun.com
“I need to talk to the care taker” Malini said with a strong tone.

“I can arrange for it mam, may be after we finish the tour” said Greg.

“No, it can’t wait. I need to tell something important” she started getting impatient. Ranbir and Greg exchanged blank looks.

“Mam, if you could tell me what it is, then I can inform him right away” He pointed to his walkie talkie.

“It has a plastic cover in its small intestine” she announced with firmness in her voice.

“Honey, you must be tired, can we go home?” Ranbir thought she is talking out of exhaustion.

“No I am fine, but he is not and we need to attend before it’s too late” she said pointing to the Tiger. For the next ten minutes, she kept screaming about the pain the animal is going through. The animal’s growling got louder and she became hysterical. It was hard to tell whether she was reacting to tigers sound or tiger to hers.

It was too much drama for Greg to handle, so he looked at Ranbir, hinting him to take control of the situation. Ranbir never seen Malini crying like this, he put his hands around her shoulder.

“Sweetie, Lets go home its getting colder, I am sure Greg can take care of it.”

“Yes mam, I would immediately call the keeper, I promise we would run some tests on the tiger”

Ranbir spent rest of the day with her at home, pacifying and ensuring that everything is going to be fine. Her temperature rose and she started shivering uncontrollably by mid night. Ranbir rushed her to the hospital, all the while praying for his beloved wife and unborn baby. By early morning Malini’s temperature became normal and she finally drifted off to sleep. Ranbir walked to the cafeteria of the hospital for a quick coffee.

When he flipped the daily paper, sipping coffee the headlines on the third page almost gave him a heart attack.

To be continued..
Srivats
story whatever

U r amazing in Story telling! Simply loved this one!..Yeah..like a tribute to forest Tiger from a real Tigress!

Loved the narrations...very egar to knw wht next enrolls..post it soon!

Kayni said…
I've heard similar stories like this back home in the Philippines. I got goosebumps reading this. Very powerful.
4:23 AM

A journey called Life said…
ohh shucks just why didnt they listen to her and get the tiger checked?? :(

and i want to second Ramesh.. suspense tangalai..
9:03 AM

Anuradha Shankar said…
Sri, u are really getting great at storytelling... and keeping us waiting for the next installment :) god going!
1:08 PM

Chatterbox said…
Unexpected twist in the story :)
Love the way story is shaping so far.

Can't wait for the next part.

Anonymous said…
i like tigers! we are cousins LOL
6:06 PM

alice-in-wonder said…
Next part please. Got no patience :D
3:18 PM

Pri said…
whoaa..im all curious now..when are u going to take this further??

Popular posts from this blog 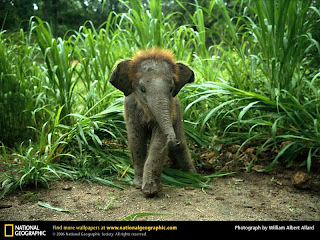 I happen to see this video of elephant giving birth and it blew me off. The mother elephant (after delivery) checked the calf which neither breathed nor moved. After several kicks and a quick blow the calf took its first breath to everyone’s relief. In next few minutes the calf stood up and looked perfectly fine. The mother seemed so happy and proud and I almost heard her say “see I have made my child and I know how to take care of it”.

Nearly million elephants are killed in africa during last two decades, that left so many orphans, think before buying Ivory stuff , photo courtesy National Geographic
This morning found me in an unusual place, a baby shower function (locally known as “Seemandham”) of my cousin’s wife. Unlike abroad it’s a family function here and I was obliged to attend. Needless to say I was surrounded by truck load of aunties and soon to be, worrying about my future love life and stuff.

On occasions like this, men get busy taking part in the rituals/ doing the transpo…
Read more

Food for thoughts and stories to talk 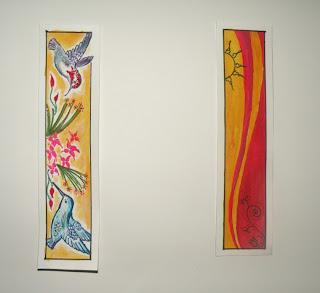 The page markers I made for consolation prize, The one on the left is for Rachana's Humming Today. The one on the right is for Savitha, It denotes her vibrant yet sensitive and elegent personality.
Today I ate rice by hand at lunch (I have lost this habit a while ago). It does have a difference in taste. I read somewhere that it helps by preparing the body to assimilate the kind of food you are taking. (Contact with oily food would make u secrete more gastric juice required for the digestion) Talking about food, Singapore has got vast variety even for a veggie like me. When I pack my bags by next month, I am going to miss eateries/food that isn’t available in India.

Here goes the rest of the stories from the contest, I am sure you are going to have as much as fun as I did while reading them. I have included the details of my favorite foods (of Singapore) in between for you to snack while reading ;)

Ondeh Ondeh, a malay sweet, equivalent of Kozhakatti with sweet center, I am addicted…
Read more

Raagi seeds from the loft 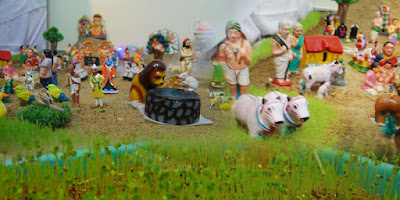 “Where are all the Golu Park dolls?”, I asked my mom over the quiet lunch.  “enda kanna. It  must be on the loft”,  she looked at me curiously. Without waiting for my reply she continued “Do you want me to pack that so you can take it Singapore? “. That was a lovely gesture I thought. She understood that I missed Golu and I might be interested to have them. Only she could understand me without much words. “Nothing ma, just wanted to see them”
( pic courtesy : Google )
After lunch I managed to get on the big stool made specially to access loft, and like a director of a movie, she guided me to the location among boxes of stuff. Golu is a 9-day festival where we adorn the home with beautiful mud idols of god. Park is basically a miniature village usually set up around Golu on sand. Its decorated with plastic houses, trees, villages, trains etc. “ Paathu kanna there is so much dust, why don’t you wear a kerchief mask, you are allergic to dust “ she raised her usual concern.
There it was, my…
Read more